Skip to content
We had a great day today.  We made it to the Grand Canyon by 9:30 AM and spent about four hours there. At one point all the guys were alone for a good 45 minutes each, most of them spending some quite moments alone in the Word and gazing at God’s creation.  Cool stuff.

The Boys and the Canyon 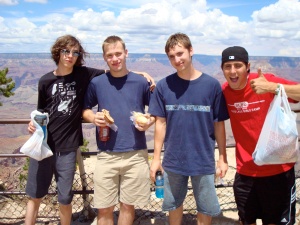 Ricky had the most fun... I guess?

After the Canyon we made our way back (all the guys sleeping, making me completely jealous) and came down (south) through Oak Creek Canyon toward Sedona.  We stopped off at Slide Rock.  What a hoot.  There were a ton of people at both state parks today!  Slide Rock got the best of us too… a few of us slipping into the water while holding our backpacks and clothes!  Dylan unfortunately was the hardest hit… bye-bye Ipod (water damage).

Dylan discovers the death of his ipod

We then hit the town of Sedona for dinner.  Good times there as well.  Check out the beautiful scenery!

Sedona and the rainbow

We made it back to the house at about 9:30 and I want to get a post about one more of “the guys” before heading to bed early!  I am beat.

The first lifeboat meeting at Vince’s Pizza was attended by Frankie, Alex and one John Dakin.  It is hard to believe it was nearly 4 years ago.  John Dakin was a skinny and slightly socially awkward boy when I met him.  He is now a strong young man whom I would describe as a true gentleman.  His “Christ confidence” is such an encouragement to me, I believe he is in a very good place in his relationship with God. His tender heart will take him a long way in life.  He set the tone for being vulnerable in our lifeboat and I think every guy is thankful for the tone he set.  I believe John is going to make a fantastic father and husband; I envision John being a stable elder in his church, serving in a variety of ministries.  His immediate plan is to study at Highline and then transfer to a four-year school.  Pray for him as he considers helping with the BPPC youth group (trying to balance school, work and ministry life).

My Bold Prediction for John: I think John “The Gentle” will emerge as one of the best WWE wrestlers of all time.  He will be “Jesus in a spandex Jumpsuit” to the many lost souls who attend and work in that industry. Sure he may look awkward, but he’ll body slam his opponent and wrestle them into submission, only to invite the pour soul to submit to the real maker!

John, living on the edge

2 thoughts on “The Grand Canyon and John”