My latest post at the Dare 2 Share blog may have you wondering if I’ve lost my senses… I make the argument that I really don’t like these three phrases:

I have a lot of fun writing for Dare 2 Share and I can see already that this latest post has gotten some good action! Check it out here!

Ask a teen about her favorite movie and you may be caught listening for a few minutes.

Ask a young man about the best video game out there and he’ll talk up a storm.

A teen athlete may go on and on about his last game.

But ask a Christian teen about his/her relationship with Christ and you may get a blank stare.

Yes, it can be intimidating, but it’s mainly intimidating because we just aren’t practicing it.

In my most recent post for Dare 2 Share, I answer a basic question via video, “How can I bring up my relationship with Jesus to my friends?”

Check out the full post here or watch the video below.

I got a late start on my spring cleaning, but who can blame me, the spring was jam-packed with all things BUSY! Mission51 Retreats, consulting and speaking at a couple conventions/conferences.  But the cleaning did begin! 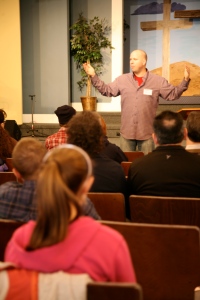 The fish was THIS big! My stories are NEVER exaggerated!

I would love to head into the summer with most of the little clean-up projects taken care of so that I can get rolling with some larger Youthmark projects (a few big writing projects). I’m pumped about this summer, time with family, time for writing, but yet my schedule is fairly open, perhaps a little too open? If you have summer or fall speaking opportunities, I’d love to fill in some gaps for you…

I just updated my speaking page, you can link to it above or right here. Maybe your church or org should be added to that list? Don’t hesitate to contact me (just give a few details of what you’re looking for and when)!

My car is clean, the garage is next! Blessings on your late spring!

Do you like to be challenged? Are you one who wants open dialog? Maybe you’re even one who fears change, but embraces the fact that we must?

Or are you closed?

I understand the reality, in the youth ministry world, I’m pretty old. Somewhere around the age of 28 I was seen as a veteran in youth ministry. By 35 some probably saw me as one riding off into the sunset. Funny thing is, at 40, I don’t feel old and certainly don’t think I act old (hopefully some may consider me mature, but not “old.”). I’m still passionate and energized by all things Student Ministry!

One reason I believe I am not “old” is that I believe I am “open.” I love collaborative! Though I have convictions I welcome discussion. I have ideas, but live in the reality that mine might not be best. I understand that I can hold to my theological beliefs yet change my methodology. I’m open.

I hope you’re open too! 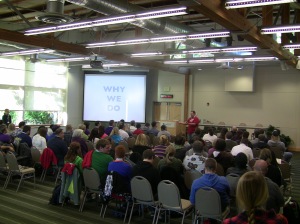 This fall I am honored to once again be a part of fantastic event for others in the student ministry filed. The Youth Cartel’s Open Seattle will take place on Saturday, October 26, 2013. I hope you’ll put it on your radar now! This one day event could prove to provide months worth of team discussions (especially if you strategically bring your volunteers).

Here’s the kicker… your voice is needed! Not only is your voice needed in each of the sessions (the last 10 minutes of each 40 minute session is set aside for real conversation/collaboration), but Open Seattle  is right now looking for presenters as well! You can submit your session ideas here.

Open presents a great mix of local, national and even international voices. But I LOVE that they favor the local voice (they want the majority of presenters to be from the northwest)! So, submit those ideas now. Risk a little! Be open!

I believe the youthmin world is shifting, you may be viewing it from a completely different angle, but it’s an angle I/we need to hear about, please bring your voice to the table.

Yep, the brief break is over… after nearly a month of really not posting, I shall return to some regular posts. It really was an unintentional break to begin with, things just got to be very busy in the midst of the Mission51 Retreats (a post about that is on the horizon).

Today, I soft-launch back by pointing you to a post that I wrote for Dare 2 Share dealing with the power of invitation.

Earlier this month I had the opportunity to travel to Southern California for the Youth Ministry Executive Council. This yearly gathering, hosted by the National Network of Youth Ministries draws the lead person from a myriad of youth ministry related organizations. I love the relationships I have formed from these gatherings. A few years back I was so honored to have received the invitation.

The event is NOT what gets me to go back, the relationships I have with these men and women from across the country is the lure! Relationships matter!

Have you ever thought about using the “power of invite” in your own life of faith-sharing? Getting your friend to church is great, but that is not the end-goal! Check out my latest post at the Dare 2 Share blog and see if it inspires you to make some invites this week! Relationships matter!

Selah: To pause and consider.

I’ll be back soon. I promise.

I was recently near Des Moines, Iowa, consulting for Ministry Architects. When my evenings were complete I would retreat to my hotel and while channel surfing I found a football game on (in the spring?). The Big Ten Network was televising the spring scrimmages for the Big Ten universities. I caught a few minutes of the Black and Gold game for Purdue.

It got me thinking, football is not until the fall, but these teams are already preparing for their autumn season. Much game-planning and preparations are already going on in order to prep for the fall. I think the same can and should be done in youth ministry.

Though five months out, I’d like to propose five things youth ministries can be working on right now to prepare for the fall.

September is coming! With just a few hours of spring prep and summer action, you can be more prepared than ever going into your fall. Calendar your events, communicate with parents, develop teens in their areas of giftedness, prep adults for mentoring and connect your congregation with teens through prayer partnerships!

It’s mid-April and you’d think that most (if not all) youth groups have their summer plans laid out, but you never know? In the last week I have had two Montana towns (pastors) in need contact me to ask if I may know of a youth group that could come serve them this summer.  Great needs and they’re asking the Lord of the harvest to provide the workers…

If you’re in the northwest and/or interested in a trip to this region, I couldn’t think of a more beautiful place to do a VERY inexpensive mission trip! Seriously, you could likely do a trip like this for less than $200 per person! Because our mission product-line is less “sending” and more “all-inclusive mission prep/follow-through” I’m happy to show you how to do this in a super-affordable way!

Both of these communities in Montana will provide you and your group the opportunities to:

If you’re interested in some last-minute planning (that we’ll help you with), but a FULL IMPACT trip, please contact me here, I’ll get you in touch with the right people.

You may just be the answer to prayer for one of these two pastors who contacted me this week!

Being a parent of three I understand the dilemma that parents face when it comes to exposure to the things of this world… For my most recent Dare 2 Share post, I was faced with what may be my most difficult question yet.

Check out the full question and answer here.

In summary, “Ben” asks, “what if my parents tell me I can’t relate to non-Christians, but I really want to evangelize?”

I provided my answer via YouTube below, but I’d love for you to read his entire question at the Dare 2 Share blog.

This blog post was written at approximately 37,000 feet above the earth as I travel from Boston to Seattle. I’m certainly flying high after our first Mission51 Retreat in New England this past weekend!

Just like San Diego we had three different churches represented, which to me was a major victory for a first-time market! However, the most major victory belongs to the work of the Spirit in the lives of these teens. God did a new work in so many ways, here are a few:

Friday Night: This year we launch our Friday night program in the most unique way thus far… Without giving anything away (still have four more M51 Retreats this year), it was very evident from the start that this group was different than any we have had the last few years. Because there were no groups that had ever done anything Youthmark, this felt very new (much like 2009). We were about two-thirds through the night and it became abundantly clear to me that I needed to jump off track for a few minutes. I sensed the Spirit telling me to pause and simply present the Gospel. It was as if the Lord was telling me, “some are ready to trust in me.” I was obedient, He was faithful. Nine students placed their trust in Jesus for salvation for the first time!

Saturday: There were several “new” things that took place on Saturday. Our Band, Double Vision (15 year old twins Micah and Mason) continues to do a wonderful job leading not just in worship but in several other areas, well this time we recruited a couple other local teens to facilitate and speak. We are pushing Student Led, Adult Mentored Ministry (SLAMM) and it was phenomenal to see these Rutland teens step up into their areas of giftedness. 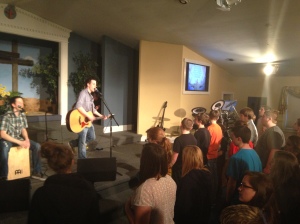 On Saturday evening, after an impromptu after-event concert (Double Vision performed), Rob Townshend had a conversation with one of his teens and she placed her trust in Christ as well!

Sunday: Though the M51 Retreat was complete, I was asked to stick around and preach at Calvary Bible Church. What an honor and the second time this calendar year! This time though I got to do a new thing; Rob Townshend and I tag-team preached, it was a blast!

I tallied one more new state as we traveled to Boston via lunch in Maine! While on that drive I received one more bit of new-news! Incredibly, one of the young ladies, who almost didn’t come to the Retreat (she says, “my dad made me go”) send me a Facebook message to pray for her as she was sharing her faith with an atheist. About 20 minutes later a second message… “He just trusted in Christ!”

I like all this new stuff! Thank you New England!