Another “What Am I Thinking”  (WAIT) contest has begun. This one is a unique prop a guy in North Carolina created that ended up being a bad idea as 9-1-1 was called a few times as a result.

So, rather than it being a real-life bad idea, I thought we could redeem it and make a contest of it…

If you have a thought or caption that can go with this one, let’s hear it!

I’ll give props to those who come up with some clever captions and pick a winner on Halloween. The winner receives a handful of Aaby-leftover Candy (and we get good stuff). 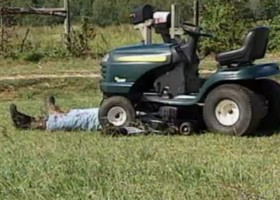 Looks like more overtime for my husband! ~ Lori (NOTE: Her husband is in law enforcement)

Unfortunately, no one was around to hand John a screwdriver or a bandage….maybe the mailman would come soon… ~Chris Cummings

Bright side? At least the bag attachment was on. ~Ron Larson

With a rebel yell, he cried “Mower, mower, mower!” ~Lori

“I accidentally laid under my lawn mower.” ~Taylor Murray (so stupid, but so funny!)

“Hey Ciscoe, in a situation like this should I bag or mulch?” ~Ron Larson

How to know she’s really not that into you: a John Deere Dear John. ~unowho

Daily Gazette — Husband lays down for nap after mowing the grass. Wife last seen running away from the scene. ~ J Web

See, Brian . . . we TOLD you that David couldn’t handle mowing the lawn. Now go be a good big brother and get him out of there. ~the wifey

Gotta say that pretty much every comment could have been in the running, these were hilarious! Loved a couple of Ron Larson’s and almost gave it to him with either of his contenders, but honestly, the one that continues to make me laugh the most, is the 80’s flashback and creative use of Billy Idol’s song. Good job Lori, you get two handfuls of candy!