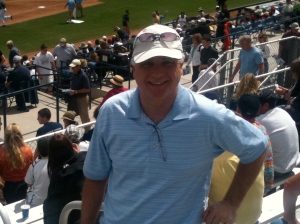 Buzz is a big baseball fan too, added bonus for me!

Just over two years ago (July 2008), the Aaby family did something crazy,  I resigned my position as an Associate/Youth Pastor so that we could start Youthmark and I could become President of the organization.  Some would see it as crazy, I use the word loosely, because it never felt crazy, it felt, faith-filled. Over the last two years we have seen the Lord provide in only the way that He could.

About this time last year we were able to add some help for Youthmark by contracting with Kirk Petersen.  Kirk is a long time friend and ministry partner (he was a Youth Pastor for about 15 years).  He served Youthmark faithfully this last year and it looks like we’ll continue this relationship for another year as he serves as our Director for the Oregon and SW Washington region.  You can read the introduction of Kirk from my post from last July here.

Well, here we are in August of 2010, it’s time to bring on another team member.  Buzz Huget has joined the Youthmark crew.  His title: Director; Field and Follow Through. It seemed everything started to come together last spring while I was on a scout trip for the 2010 YMV’s to Colorado and Arizona. Knowing that the most natural “next” position for Youthmark would be a person who could oversee our receiving communities (the places our mission trips go to), I invited Buzz to come on the trip.  While we were driving the long distances between rural communities and major airports we dreamed of what could be.  Buzz watched me in action with the rural Pastors, and then, very naturally, he stepped in and by the time our scout trip was over I was able to really just watch him in action.  He’s a natural fit.  A man of God who loves to listen.  He hopes for those who may have forgotten how to hope for him/herself (or his/her ministry).  He prays with passion (and expectantly).  Buzz will serve the receiving (what we are now calling “host”, a term Buzz already coined) Pastors/Communities well.

A little background… Buzz and I met while I was serving as an Associate Pastor (Youth) at Boulevard Park Church (South Seattle).  He is an elder there.  He began attending a service I had started on Sunday evenings. This service, entitled, merge, became somewhat of a church plant within a church.  After about a year, I started throwing ideas off of Buzz and we began dreaming and praying together for our merge services.  Buzz came on board as sort of a co-pastor of that service and we served as we watched the Lord grow that service from about 40 the first week to 150+ at our last service.  Since I resigned at Boulevard Park, he has continued and started a couple different men’s ministries initiatives.  Buzz may not have “missed” his calling as a Pastor (as I have joked with him in the past), but I do believe he is functioning as a Pastor in many ways.  Now he’ll get to do that with Youthmark as well.

His primary responsibility will be to shepherd our relationships with our Host Communities (Pastors and key leaders).  He’ll do the scouting and initial contacts (freeing me up to not travel as much!), while at the same time he’ll get to know our sending leaders so that we create the best partnerships between Youthmark and both the sending/host communities.  Having Buzz on the team will also give us a better opportunity to follow-up with teams who have just served and get us valuable feedback as we move forward.  In addition Buzz will participate in the Spring Retreats, some writing projects and a few other tasks!

Can’t wait to see how the Lord uses Buzz.  He is supported by his wife, Lisa, their four adult daughters (and families) and their teen grandson, whom they are raising as a son.  I’m so excited to have not just Buzz, but this loving and supportive family on the extended team!