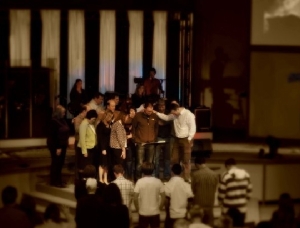 A recent pic from our church

Great times yesterday being able to deliver God’s Word to the flock at Faith.  For those interested, you can click here to get to the sermon.  I commented to a few people that I really enjoyed being able to preach and really discovered that I had missed it more than I had thought.  Though I have had the opportunity to speak quite a bit (camps, retreats, youth group, Youthmark, etc.) in the last year and a half, it had been since August of 2008 that I had preached in a Sunday Morning service (shortly after starting Youthmark I went back to Boulevard Park to preach).

My wife said of yesterday, “that may have been among the best, if not the best sermon you’ve done.”  Wow, that made my day! Such encouraging words!

Ultimately a sermon is only “the best” if the recipients and the deliverer have gleaned from God’s Word, allowed the Spirit to convict/move and then they all become doers of it.  So, no Monday Morning Quarterback here, it’s time to go live it out instead of just analyzing it!