If you haven’t read the first two posts about my Gulf Coast scout trip, you will want to go back and read these first. 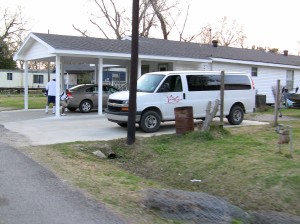 We were fifteen minutes into our ride when we saw him.  David, one of the men Rob had told us about, was about to get into his car.  David is the neighborhood evangelist, uncle, coach and all-around great guy.  Saved from a life of drugs many years ago, David has now devoted his life to reaching the folk in and around Vinton.  We immediately stopped and within seconds Rob and David were embracing.  Almost everyone we had seen in Vinton’s “down town” (read: main area) was African American, it was refreshing to see Rob and David embracing and obviously answering the question Nathan and I had about racial relations in Vinton.

After Rob introduced us and gave a little background as to what was going to happen this summer David was ecstatic.  Though he needed to get a young man (9 year old) to a basketball practice, David first took the time to pray for us.  Now, I’ve been prayed for (in person) many times, but this was a very blessed prayer.  As David was praying I could literally feel the Lords affirmation that THIS was a holy moment and a divine appointment.  The Holy Spirit was moving in each of us as we all prayed for His work this summer in Vinton.

After the David blessing, we loaded back into the SUV to finish our tour, set up plans to meet the next day and finalize our contacts Rob had given us for the next day.  It was a great day.  Literally, three hours earlier we had zero contacts in TX/LA.  Now we had one town nailed down and two meetings set up for our two other needed ministry places.  God was blessing/providing, yet this was just the beginning… (the pre-cursor to let you know there will be more to this story).

We eventually found our lodging for the night, I did the math in my head, In the last 76 hours, I had slept a grand total of about 4 hours. I was absolutely exhausted and by 9:00 PM I was falling asleep.  For the next 12 hours I was continued to receive the Lord’s blessing in the form of a DEEP DEEP sleep!

One thought on “Gulf Coast Three”