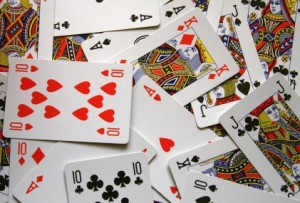 For the last 0h-so-many years I have participated in a Hearts (card game) tournament.  My friend, Frank, had been hosting it at his Lake Tapps home location.  He was probably a good 7-9 years into hosting the tournament when Boeing up and moved him to California (for some reason the 25 or so guys who participate didn’t want to commute for a tourney?).

At the time of his move we decided it could be a good thing to keep it going and I would host it (Frank would come home for Thanksgiving to see his extended family anyway).  Frank was not long for California (I think he may have only been in CA for one or two holiday seasons?).  Anyway, he returned to the NW and we like the tournaments enough that I kept hosting one and he added a second tourney (he is now up north in the Everett area).   So, now twice a year around the holidays (T-Giving and Christmas) we participate/host two tournaments.

We are moving my tourney to my dad’s house this year (something about an 8-month old and sleep?).  They are always a lot of fun.  I just hope the move offsite (away from my house) allows me to play better than I have for the last 3-4 years.  If you’re good at hearts, live in the greater Seattle area, you’re a man (sorry, we’re not Politically Correct yet), and you are free tonight (Saturday), hit me up with an email, we’ll get you in.