We made it to Boston!  As soon as we arrived we were able to take a tour of Fenway Park.  For those of you who don’t know, I took my dad on a baseball trip to Chicago last year.  We were able to see US Cellular Field (WhiteSox), Wrigley Field (Cubs) and Miller Park (Milwaukee Brewers).  I liked all three parks, but Wrigley was the one we both looked forward to the most.  It did NOT disappoint at all.  Heading into this trip, I was certainly excited about all 4 parks and Cooperstown, but was most looking forward to Fenway, here in Boston.

Even after last years trip to the Midwest, Safeco Field in Seattle remained my #1 park I had ever been to.  Well, Fenway has now moved into first place.  The stadium, atmosphere and everything else combined (even w/o taking in a game yet) makes it the best I’ve been to.

Here are a couple pics. 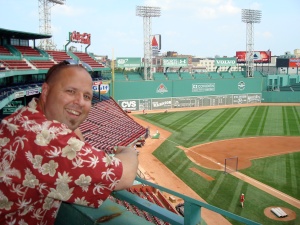 One of my first views

Not my seat tonight!

After our introduction we were able to head over to the “Green Monster” and sit in the seats there as well.  These seats were added in 2003, and retail at $160 per game (and you have to enter a lottery to even get to one game here).

On top of the Monster

view from the Monster

After touring and on our way out I got a part time job and then David and I were interviewed by the NBC affiliate.  Okay, the first isn’t true, but the second is!  We might be on TV tonight in Boston, if I find it online tonight I’ll let you know! 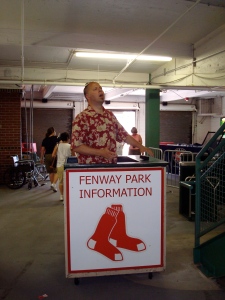 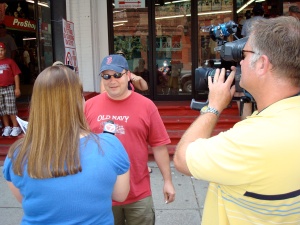 And then when we got to the hotel we got on ichat with Mom.  Here is a pic in Boston showing Seattle showing Boston!  Cool with technology, huh?

Dylan made my blog!

Off to the Best Stadium I’ve ever been to!

One thought on “Bean Town!”